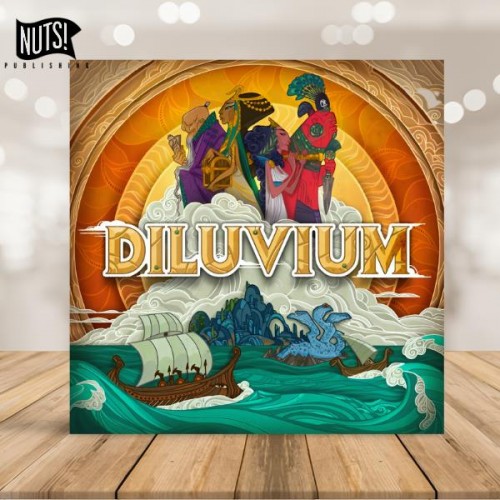 As the leader of a powerful civilization, you must explore and settle the islands available to you, with the goal of gaining the most gold possible.

Players choose one of four actions on their turn: explore, settle, produce, or engage.

The game ends as soon as any one of the resource pools is exhausted. The civilization with the most Gold in their reserves is declared the winner.

For never-ending months, the skies gushed onto the Earth. Continents were drowning, snatched by the voracious seas, as mighty empires tried to survive by building outstanding ships.
The golden age of antique civilizations was reaching its end.

In quest of an emerged land, you each lead your people and manage to reach archipelagos. A possibility to rebuild your world faces you. But you are not alone. Other civilizations have faced the same tragedy as yours, and they all gather on the only remaining lands not to have been devoured. The ruins-dotted landscape testifies you were not the first ones to set foot on those shores. But you might learn from this mysterious empire of Mu in order to assert your supremacy. You will attempt to retore your majesty by exploring the seas, conquering islands, gathering their resources and by arming yourself for the war to come. Not so much space, for such mighty empires… You know there won’t be enough space for everyone, so you must act now if you want to become the greatest of all.

You can explore and conquer Diluvium’s islands from 2 to 4 players.

A solo mode allows you to play alone in a campaign of which branches are only up to you! So, get ready to assume the consequences of your actions, the future of your empire depends on you.