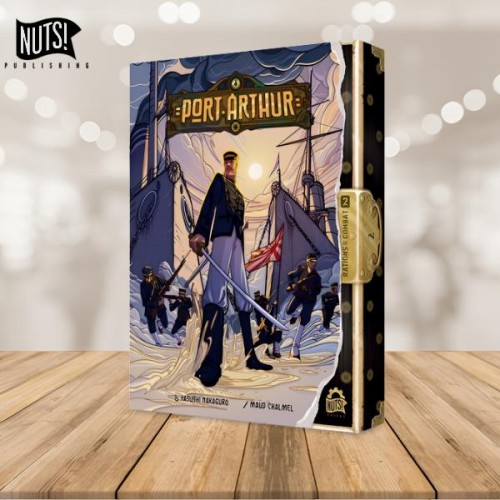 The Russo-Japanese war that took place on land and at sea at the start of the 20th century began with the Japanese invasion of Korea and their victory at the Battle of Mukden. However it was at sea that the Japanese were to deal the final blow, at the Battle of Tsushima in May 1905 in which the Russian Baltic Fleet was sent to the ocean floor.

Port Arthur is a strategy game for 2 players, with a playing time of 30-45 minutes.

Take the Japanese side with their central position and their small but powerful fleet, or play the Russians who have to prevent enemy landings while awaiting the arrival of the Baltic Fleet. In 6 turns can you succeed in controlling more zones than your opponent and win the war?

Each ship has a Gunnery Strength (the ship's firepower), a Defense (how much damage the ship can still withstand before sinking) and a Speed (useful during movement). All ships of one side in a Sea Area are collectively called a "Fleet".

One turn consists of the following phases:

When all phases are over, one turn ends and the next turn begins.

At the end of the sixth turn, if the Japanese do not have an army in Mukden, the Russian player scores a major victory. Otherwise, the Player whose side of the POC track the marker is on wins. If the relative difference in POC is zero, the game is a draw.

The victory points for this game are called POCs (for Points of Control). When a player gains POCs, move the POC marker on the track to the side of that player by the same number of POCs gained.