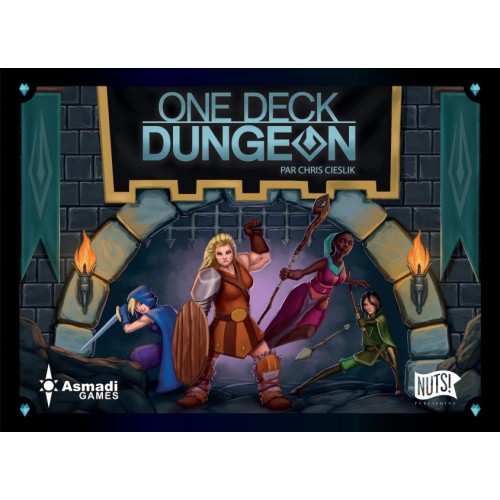 Adventure calls ... but you don't have four hours or the desire to set up hundreds of pieces. You want action now! One Deck Dungeon lets you jump right in, bash down doors, roll dice, and squash baddies with style. By using each of the cards in four different ways (as an encounter, XP, a skill/potion, or a stat-boosting item), all the experience of dungeon delving has been fit into a compact package. You can venture in alone, or bring a friend. The dragon doesn't care, he's happy to eat both of you! And don't even think about trying to spare him, that's the wrong game entirely.

One Deck Dungeon is a 1-2 player cooperative game. With two sets, you can play with 4 players. A game typically takes 30-45 minutes, but it could be a little shorter if you get eaten early or a little longer if you're learning or taking your time.

One Deck Dungeon comes with 44 Encounter cards, 4 Dungeon/Boss cards, 4 Level Up cards, 2 Basic Skills cards  and the important Stairs card, without which you would be stuck on the first floor forever. Also included are six large format cards: one for each of the five Heroes, and a sixth that serves as the Turn Reference. For the purposes of combat, we have 30 dice in four colours. And... for when you have a bad time at combat: health markers to show damage to your heroes, and potion cubes for when you want to heal or do other amazing potion things.

With two boxes of One Deck Dungeon, you can play as a four-hero party. Shuffle the two packs of encounter cards together, and give each player a hero. When you are exploring, add piles of two cards each, face down, to make each door.  For an encounter, reveal both cards. The four players can decide on the best way to share the cards – each group encounters one of the cards, just as in a normal 2-player game.

In a 4 player game, most things are doubled to ensure the right game balance; the cost of Time passes for each turn, the experience required to level up in Experience, the potions at the start of the game – and the boss! Two monsters guard the bottom of the dungeon and you will have to split up into pairs to fight them.

Four player games take longer to play, but are an epic and fun way to go “dungeon-crawling" with all of your friends!

One Deck Dungeon : Forest of Shadows  in English : Click here!   One d..

2 bonus cards in French are available for purchase ( 2€ the card ) for the game One Deck Dungeo..