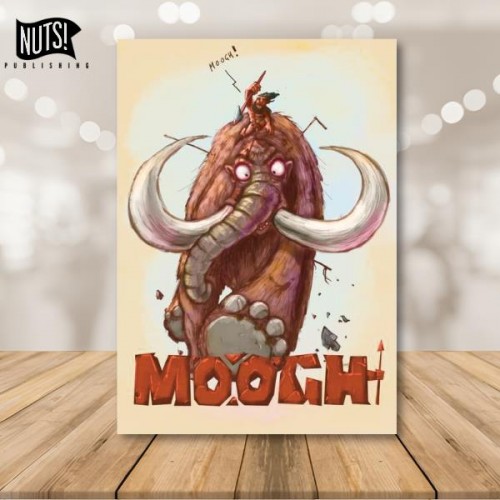 The dark night goes pale. Slowly, thin streaks of light lift up like hair and split the insipid sky. In the ocean, a drop of blue lazily bleeds from the center outwards. “Moogh” exclaims the male tribe leader. All the others around him in the cave opening know what this means. Gathering the stingers they have made from flint and sticks they set off in the now golden pink but cold morning. Scuffling through the dense woods and out into the plains they can see their prey towering in the distance under the sun which has now shown its full face. “Ugh Moogh Oog” they chant. A few moments later, it is all a vortex of hair and muscle and spouting blood as they shout and stab their shafts with flint spearheads into the huge beast.

MOOGH is a 1 to 4-player semi cooperative programmation game where tribes of cavemen are joining forces to defeat big beasts. They will fight together in order to decide who should lead the new combined tribes. By hunting Big Beasts, they will win savage points. At the end of the game, if the cavemen win, the team with most savage points may then claim the leadership of the tribe. If the cavemen don’t meet the winning conditions before the end of the game, all the tribes will lose the game.

In MOOGH, the players will have to anticipate the actions from the other tribes and from the beasts (manage by AIs) in order to win Savage points. Each tribe will have its own actions and skills (most of the actions will be resolved by rolling dice and their success will depend of the cavemen characteristics). The game has different ways to counterbalance the randomness of the dice (rage token to reroll dice, idea cards with special actions that can be activated if you meet specific condition, etc.). There are four tribes in the base game and a lot of interesting content (a solo mode, a skirmish mode, a campaign mode, a lot of different beasts, scenario with different winning conditions, items to win, etc.).

You can playtest the game thanks to with the Print & Play demo version ( download the demo ).