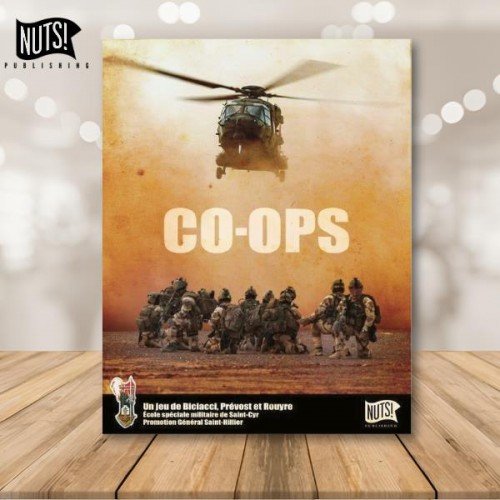 Take the lead of infantry, armor or helicopter units of the French Army. Put yourself in the shoes of a section leader in combat through two campaigns with adaptable difficulties or by imagining your own scenarios. Cooperation will be the key to your success.

CO-OPSwas imagined by three graduates of the special military school of Saint-Cyr (General Saint-Hillier class, 2015-2018). Designed as part of the simulation courses to provide a training tool for future section leaders, the game emphasizes cooperation between players against an enemy played by the game itself. Each player takes the lead of an infantry platoon, a tank platoon or a helicopter squadron of the French Army and you will all need to cooperate to win the battle against armed terrorist groups; close coordination between the different arms is the key to victory.

CO-OPS is based on simple mechanisms that can be explained in a few minutes, the depth of the game lies in the interactions between players. All players will have to get along and coordinate to conduct a complex joint operation, first to overcome the inevitable friction of battle and penetrate the fog of war... and then to triumph over the enemy.

Start by choosing one of the 10 scenarios, which can be played alone or as part of the campaigns, but you may as well invent one from scratch thanks to the wide variety of units provided in the game box and the modular terrain tiles that allow you to compose an infinite number of geographical situations. Then, each player chooses the section they will command (infantry, cavalry, helicopters) and composes it at their convenience, thanks to a very simple budget system. Time for action, now!

Every turn (about 15 minutes of real time), enemy units leave their bases and move automatically, via the squares of the game board (about 100 meters of real terrain), towards their objectives... or towards your closest units.

When combat occurs, and it will, several parameters determine the chances of success for each side: detection capacity, weapon range, firepower, ability to take fire and of course the nature of the terrain. A simple dice roll determines the outcome of the battle, with fortune often smiling to the player who has given themselves the best chances.

Putting all the chances on your side means of course adopting the right tactics, but above all elaborating and applying them together. One player's units can support another's in battle, transport them (by vehicle or helicopter) or even heal them. Each weapon has its own strengths and weaknesses, and by smartly combining them, you can increase the former while reducing the latter.

The battle lasts for a long time, as a scenario can last up to 15 turns. Also, each player will have to regularly resupply their units, reinforce them to make up for losses, while keeping an eye on their morale level.

Close cooperation will be essential to meet the wide variety of challenges offered by the scenarios: high-intensity combat, area control, convoy interception, evacuation of nationals, rescue in enemy zones...


Those challenges are waiting for you!